St Mary’s, Almeley is a small country church on the western side of Herefordshire, near Weobely – a town that occasioned much discussion as to the pronunciation of the name. Wee-obb-ley? Web-ley? I’ve been told it’s Wib-bley. Herefordshire seems to delight in names that don’t sound like they’re spelled, trapping the unwary stranger into a faux pas. Leominster being a well-known example (pronounced Lemster). And Almeley is another – there was a board in the church with tips on pronunciation (the spelling has changed over the years as well). I didn’t take a photo but if memory serves, the locals pronounce it ‘Am-il-lee’ (anyone want to correct me… feel free!). The name apparently means ‘elm meadow’, according to the guide leaflet. 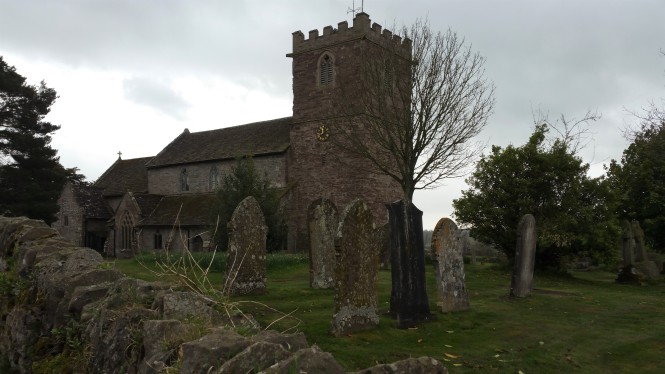 Almeley itself is up in the hills, and the day I visited, rain was threatening and it was very overcast. I made it to the church before any real rain hit, luckily enough, but noticed on my way in from my car that the church is sited next to a castle mound, which dates from the time of King John – and Henry III apparently received homage there in September 1231 from Simon de Montfort. Now occupied by sheep, it hints at the origins of the church. Certainly the guide says that the oldest stones in the building date from 1200 and I see no reason to doubt that. 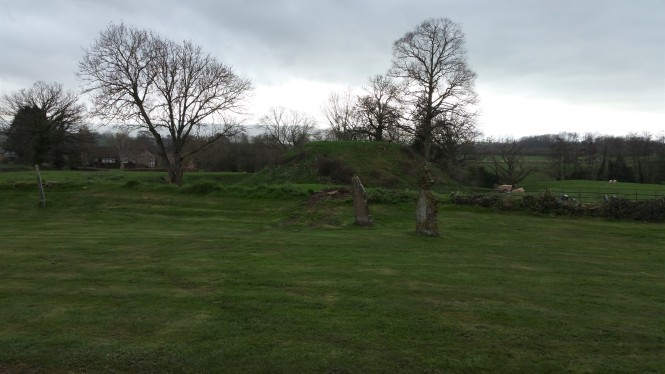 The church itself has some lovely things to look at. One of its glories has to be the sixteenth-century ceiling: the two eastern bays of the nave has, unexpectedly, Tudor boards painted to imitate square moulded panels, called a ceiliure (according to Pevsner). As I entered I could hear music being played: an organist was going through his practices. I don’t usually get such lovely music to work to but he did tell me as he left that he thought the ceiling had been moved from elsewhere, perhaps the chancel. whether that is the case or not I don’t know – certainly Pevsner does not mention this. 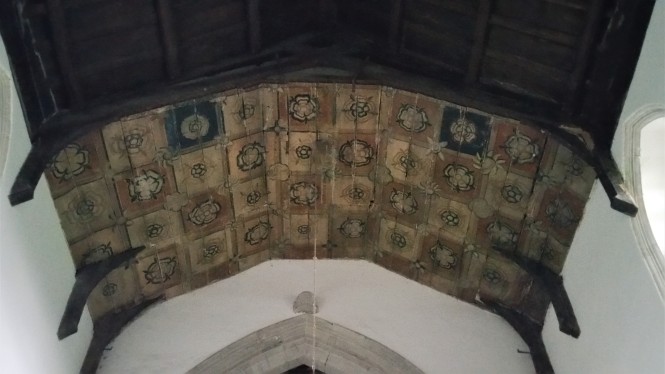 Also lovely is the rood screen below the ceilure. Sadly this is a Victorian addition, done in the 1868-70 restoration by Bodley and Garner, but still very pretty. What it does do, and very well, is to showcase the rood stair which survives with both top and bottom entrances. 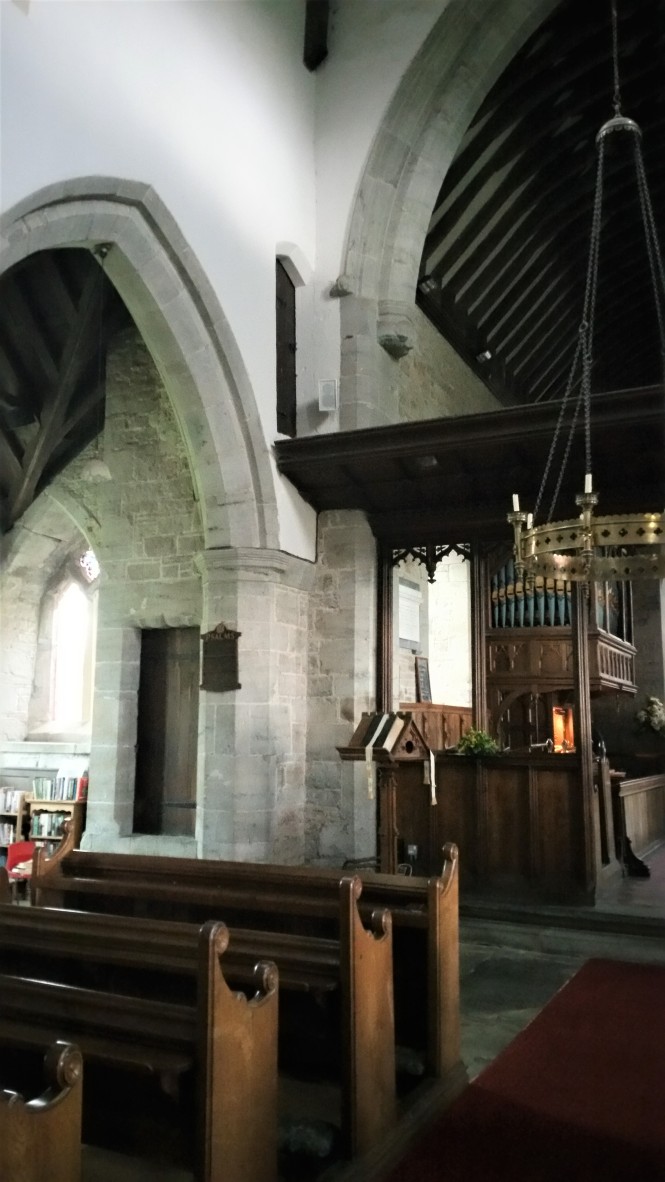 Curiously, the step into the staircase has a very big base – 66cm from the floor to the lip. Makes me wonder if the floor level of the church has changed since the rood stair was in regular use…. 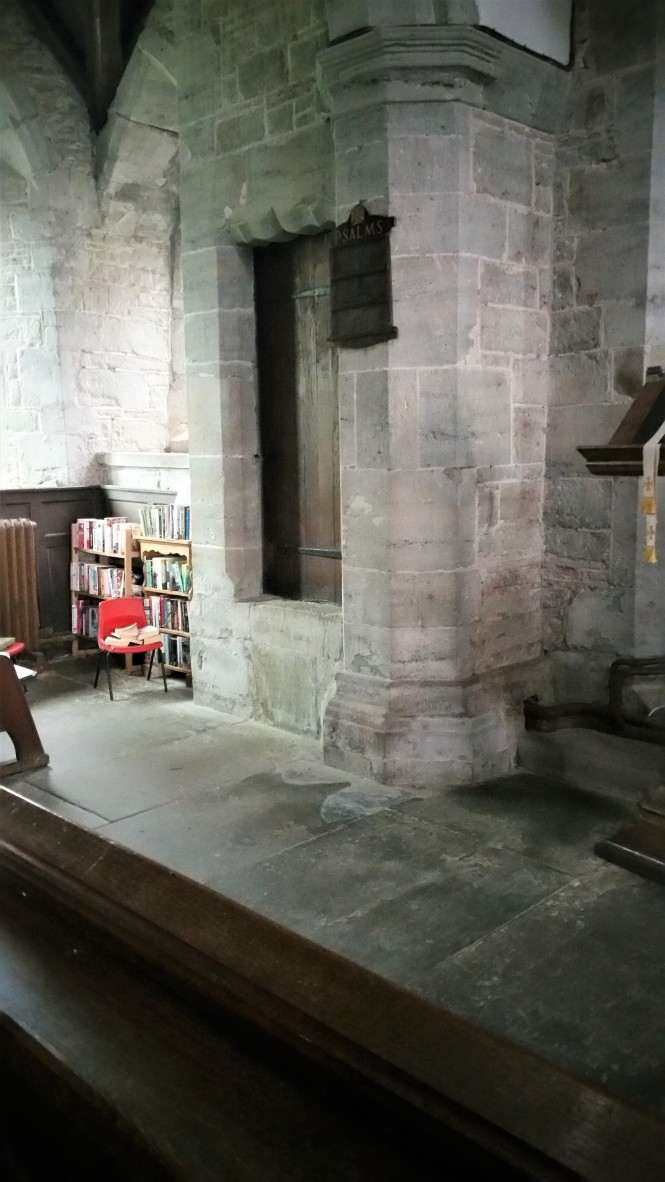 The big drop at the foot of the staircase

The other glory in the church is the front of the pews. So easy to miss, I was clued into these by Pevsner (who goes with me everywhere). These are re-used from somewhere – possibly from a gallery that once stood in the church (as the guide speculates). They are Jacobean – so early seventeenth century – as are some balusters that are incorporated into a tower screen blocking off the tower from the nave. 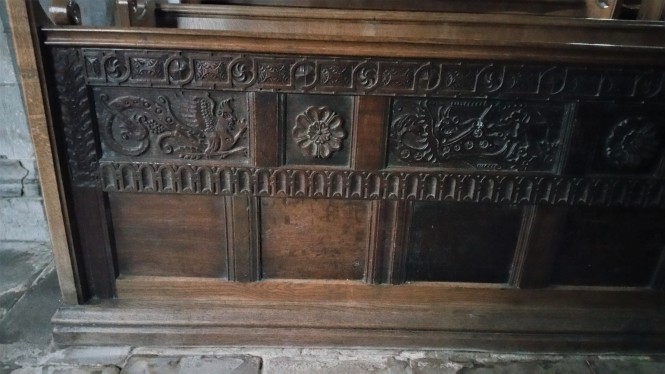 The front of one of the pews

One of the panels shows a man pulling together (or pushing apart) two dogs or dragons – I can’t decide which. 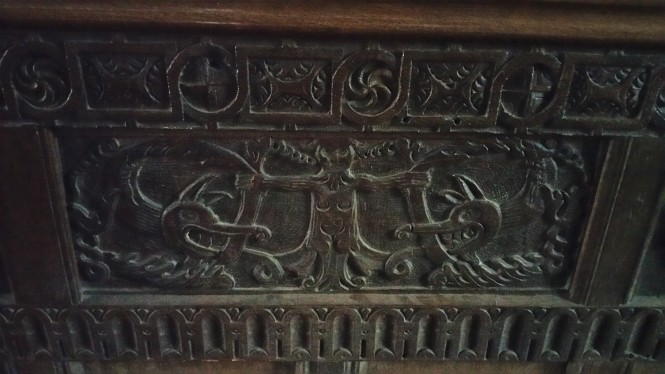 pulling together, pushing apart? you decide!

I had thought that the pulpit was Jacobean as well but I had mis-read Pevsner before I left – the pulpit dates from the Victorian restoration. The church also has a turning lectern for the old and new testament – they will spin so that whoever is reading can still face the congregation. It span quite easily – clearly it is regularly used. 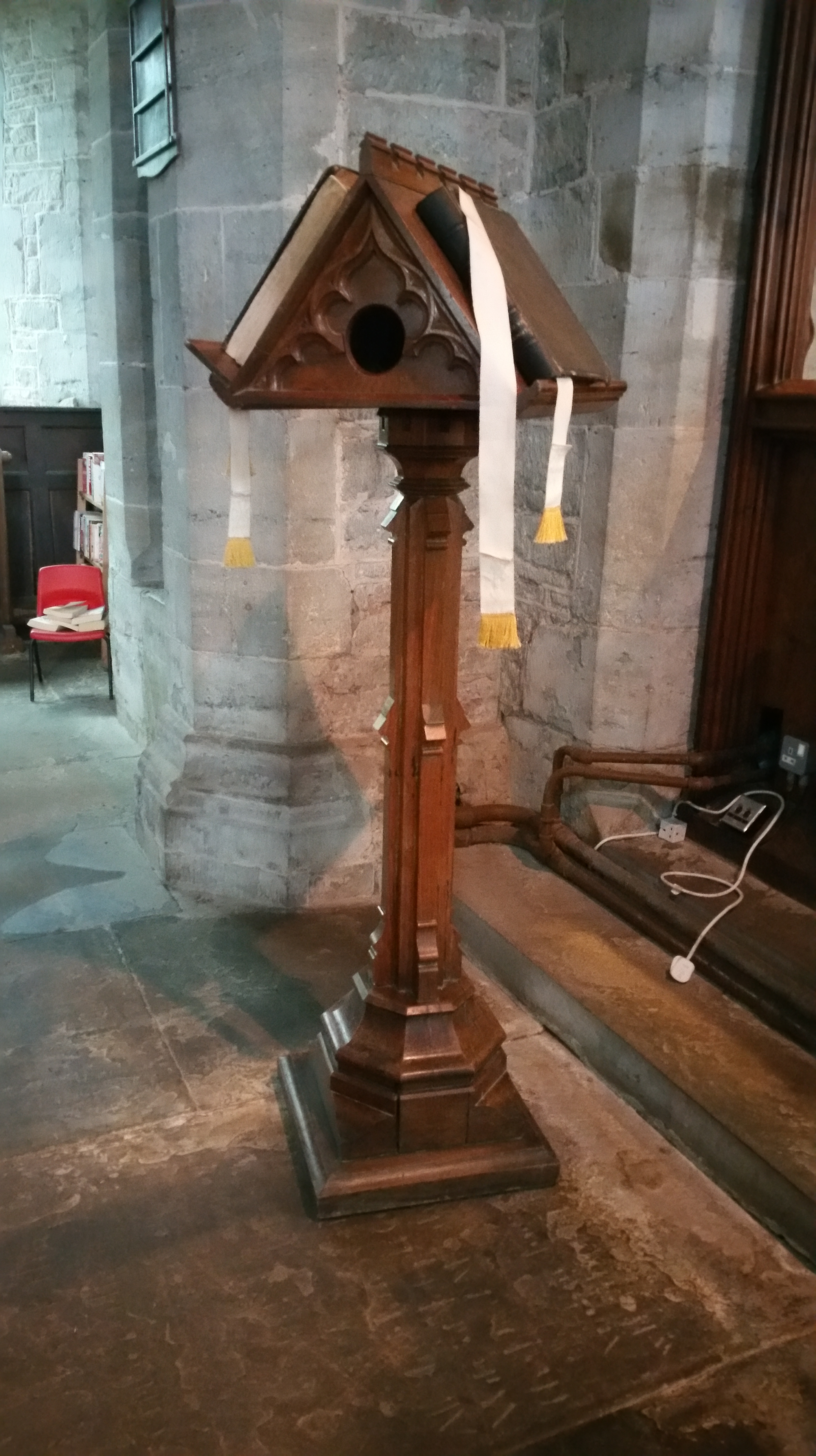 Almeley’s history is an interesting one. The parish – and possibly the church – has connections with Sir John Oldcastle, who became involved with the Lollard heresy in the fourteenth century – and who was executed for it in 1417. Almeley also has other non-conformist connections – a house in the parish (The Summer House) was once occupied by an early Quaker (Roger Pritchard) – and some of these Quakers would go on to be instrumental in the founding of Pennsylvania in 1682. The church is certainly worth a visit – if only to view the lovely ceiliure or Jacobean pew fronts.