I spent last week immersed in the archives in Hereford, and I had a great time while I was down there. I am lucky enough that my mother lives nearby so I at least have somewhere to crash; this makes doing this research vastly easier. I went there with three aims:

But before I get into that, I want to spend a little bit of time writing about Herefordshire Record Office. It’s a great place to work! They’ve recently moved into a new, purpose-built building (with a coffee machine that absolutely rocks!) that is… well. Don’t take my word for it.. !

The main working room is lovely and bright – behind me, the room extends a little bit further, and since someone there needed the blinds drawn, it has made the area around where I’m standing, holding the camera, a bit dark. But otherwise, it’s lovely – certainly more than enough natural light to take photographs without a flash on a good digital camera. The building also has good toilets, smaller meeting rooms, a display area, and best of all… a mixed reception and small area where you can sit to eat your packed lunch or sip coffee from the aforementioned machine!

Outside is just as nice, a modernist building but I think those wooden tiles are going to colour beautifully, shading to a lovely silvery colour – they’re already on their way. The archivists are so fortunate to be working there – I know other record offices around the country are really struggling with space and with their working environments, not just for themselves, but for the people that visit their offices. I wish more record offices were able to have similar working conditions – hopefully one day. But in the meantime, its to HRO’s credit that they DO have these lovely offices, and I for one will be taking as much advantage as I can!

The outside of the building

But onto my work. I left home Wednesday morning, and after a quick pub lunch, got there early enough to fit in about 3 hour’s work. They were immensely helpful and I was able to quickly assess what kind of records they have there. More importantly, I was able to assess that the methodology that I have in mind should work too, hopefully! I won’t know for sure until I actually try it and I don’t have time for that at the moment, what with my MA studies about to kick off again. But it is good news.

Thursday I was there all day, working on the second of my three aims, copying material for my MA dissertation. This is very much linked to my PhD proposal, in that its covering similar material (the MA, of course, being much smaller than the PhD) but since the MA gives me an ‘in’, it’s a way to get used to handling material that is notorious for being difficult to read and transcribe – namely church court records & depositions. Some of what I copied was in Latin, but I was able to make out enough to work out which records out of the stack were to do with my subject, I think, so I only copied those. I came home with a phone that was almost full of data and had to upload everything to dropbox that evening, hammering my mother’s internet connection in the process! 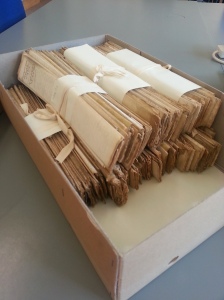 Depositions to the courts – basically witness statements. I had to copy one of these bundles, and it took me the best part of a couple of hours. Ouch!

Friday I went with my mother to Brampton Bryan. Herefordshire Victoria County History had arranged a fantastic afternoon there, with two talks, one by Professor Timothy Mawl on eighteenth century garden design in Herefordshire, and the other by Dr. Jane Bradney on the Historic Gardens at Brampton. Both really interesting talks, then we got to see the castle and grounds at Brampton, in what is now a private home, so this was a real treat. I was also fortunate enough to meet some of the people who do a lot of work on local history in Herefordshire. The day was really good, although tiring, and I slept really well that evening. Many thanks to the people who organised the day!

Saturday I was back into the archives, researching the working woman in the seventeenth century in Herefordshire. My most productive foray that afternoon seemed to be in weights and measures – these are the records of people who have been flagged up for arrest as selling items with incorrect weights or measures (a form of scam), and since there are women’s names on the list, it shows that women were working in that period. I did a lot of photographing, so after this, I need to transcribe the names and then start doing further work from there, but still, it is a starting point.

My working space at the record office

What became very clear over the last week is that I am going to be spending a lot of time in the record office over the next year or so, if not the next 4 years! It’s probably a good thing I DO like it there, and that I have access to a readily available bed. In some ways being a historian is a bit like being in the armed forces. There, the oft-quoted quote is: “long periods of boredom, punctuated by moments of sheer terror”. For historians, it’s “long periods of nose-to-the-grindstone, not seeming to achieve too much, punctuated by moments of sheer exhilaration, excitement, and joy”. I think the latter is better, personally, even if it does mean the next few weeks will see long periods of nose-to-the-grindstone…!

I’ve mainly been wading through a book by David Cressy, Travesties and Transgressions in Tudor and Stuart England: Tales of Discord and Dissension (Oxford, Oxford University Press, 2000), which covers a range of case studies, including the fantastic tale of a woman who gave birth to a cat. If you want to know more you’ll have to read it yourself, but it’s a great book, which touches on my research interests in a number of places. At the moment I’m reading a chapter on the language that was used by the laity towards the clergy – usually because the person was cross with the clergyman, for a number of reasons. Such incidents, where clergymen were told they were a ‘scurvy rascal knave!’ or a ‘jackanapes’, or even compared to an ‘ass’ (as in donkey, rather than the current equivalent of a backside, all found on page 138 of his book), could be very upsetting to the clergyman concerned, undermining his authority and it could mean that the person spitting the insults was taken to court (the church courts), which is how the records of these incidents have survived.

I was reading this in the bath (I do my best reading in the bath – I just read, obviously you can’t take notes, and that frees up the process, I think. Churchill did the same – working in the bath, that is) and as I put the book down I got to thinking. We are all products of our time. There is a school of thought in History which says that it is impossible for us to truly understand the past, as we are not of their time, but of ours, and which is why we study History, and not the past. I see the world – and the past – differently to how my mother sees it, and differently to how her mother saw it.. and so on. But it isn’t even a generational thing – someone just 5 years younger than me will see the world differently – have largely grown up with the internet, with mobile phones, whereas someone older than me will remember, even more clearly than I do, a time without those things.

The world has changed a great deal in the last 15 years. 9/11 had a massive impact. Terrorism, which in the UK, at least, seemed to have gone away (since the Irish question had been… well, not sorted out, but at least the various sides were no longer resorting to terror to solve it), surged back into people’s awareness. I remember, vividly, in the pre 9/11 years, working with someone who was Muslim, asking her questions about Islam, with no sense of worrying that she, or her family, might be extremist. It never crossed my mind at all. I just learned, and when I was asked if I would consider marrying into her family, I took it as the compliment it was intended (although I said no). The rise of al-Quaeda, and then of ISIS, is shaping a whole new generation of historians. I grew up with the threat of IRA bombings in my life. It never changed what I did, I never came close to them, but it was still a presence. Just going to the museum, having your bags searched. Things like that. I went to a boarding school – with children from all over the country – including 2 from Northern Ireland. One Catholic, one Protestant. And I learned, from them, about the enmity of the two groups for each other. I experienced – at a remove – that dichotomy, and it shaped my understanding, as an adult, of history. Where I differ, I think, from those who are growing up now, who experience the terrorism of ISIS, of other extremist Islamic groups, is that I saw – rightly or wrongly – that what was going on in Northern Ireland, and to a certain extent in the UK, as a war that we were caught in the middle of, waging war on the innocent, yes, but also with each other, and the British Government. Both sides were resorting to this. It didn’t make it okay, but it was different to what is going on now. With ISIS, with what is going on with the attacks in France.. there is only one side, them, waging war on the innocent. Sure, there were extremist Muslims in the seventies, and I remember the fatwah against Rushdie, but it didn’t register on my radar in the same way as the Irish terrorism did.

My time, as it were, has turned me into someone who sees ‘sides’, polarity, dichotomy, very readily. I don’t think its any co-incidence that I’m studying relationships – dichotomy again – or religion, and how people have experienced it. Will someone growing up now, see the Reformation differently? As a group of extremists – early Protestants – doing all in their power, to force the masses to worship the way that they wish? They wouldn’t necessarily be wrong, just different. This is why in studying History, we study not only the facts of the past, which are relatively straightforward – e.g. Henry VIII died in January 1547 – but also the shifting theories, the shifting histories. Never mind ‘Who do you think you are’ … ‘WHEN Do you think you are’ becomes important too. It shapes your thinking, and that self-awareness is critical when developing a history. For that reason, I think, all historians should have an awareness of modern history, at least as it pertains to their own lifetime. The idea that scholars can live, oblivously, in an ivory tower, has long gone. And good riddance too.

A quick catch up on the last few weeks…. they have been busy. Unfortunately, not so busy with my studies! Between housework (or work to do with the house, to be more accurate), home admin stuff (the car needs MOTing, for example), other admin, work that I’m doing for Leicestershire Victoria County History – and voluntary research for Charnwood Roots… I have done my own work but not so very much of it. This will be changing though – next week, I will be heading into the archives in Hereford and I am thoroughly looking forward to it!