Dore Abbey, one of only two former Cistercian Abbeys still used as a parish church in England (the other is Holme Cultram, or Abbey Town in Cumberland, according to Pevsner’s book on Herefordshire), was the first on the list of churches that I visited on 17th July 2017. The Abbey suffered the usual dissolution on March 1, 1537, being bought primarily by John Scudamore. It was his great-great-grandson, John Viscount Scudamore who restored the church in 1632-33. What remains today is what was the presbytery, crossing and transepts (the nave has largely gone), although ruins around the church allow the visitor, with the help of the guidebook and map, to work out what would have been where. Scudamore was a friend of William Laud, Archbishop of Canterbury, and the church was rebuilt in ‘Laudian’ style. As such, it was one of the first to go onto my list of churches to visit in Herefordshire. My visit was primarily focused on the seventeenth century elements (as that is where my PhD is focused) but archaeological digs took place around the church either side of the turn of the 20th century and the items dug up then have been placed inside the church and are available to view by visitors. I also took photographs of some of the other, non-seventeenth-century elements. The remainder of this blog is focused on a few of the photographs that I took that day, with some explanatory text beneath each one. 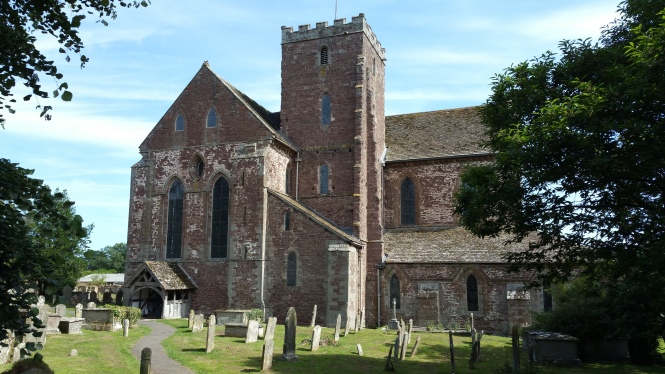 The church, seen from the main path leading down from the road. This was not the original, pre-reformation approach to the church but has been put in later, after the 1632-33 restoration.

A number of wallpaintings survive within the church. Many are like this, simple quotes, some are pictoral in nature (a memento mori, time with a scythe and hour glass, David with his harp. The royal arms of Queen Anne are also painted in one place. there are various dates for these: some date to the Scudamore restoration of 1632-33, others from 1701-10. 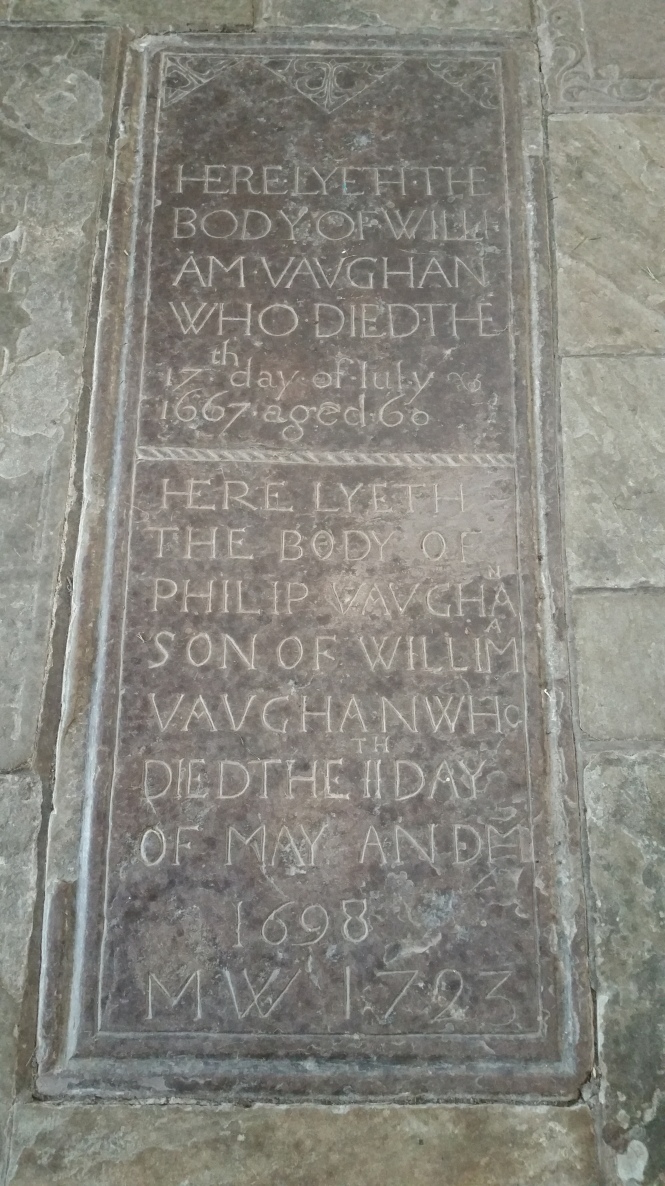 There are a large number of seventeenth century ledger stones, which are fairly easy to identify with this font – very different to that used on later ledger stones. These are all found in the crossing area.

The minstrel’s gallery dates to 1701 – and blocks some wall paintings, which were then redone elsewhere in the church. Unfortunately the stairway was roped off so I wasn’t able to climb up. 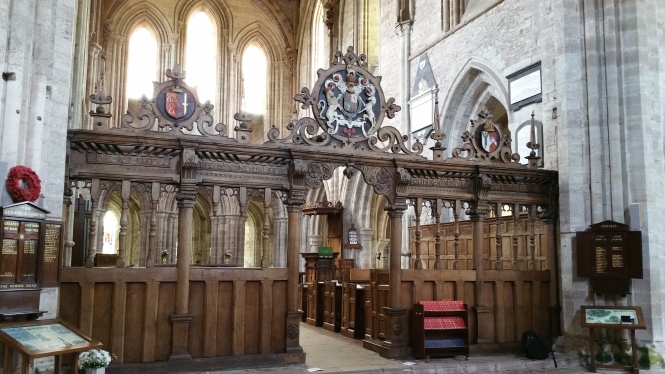 The oak screen blocking off the presbytery. Made by John Abell, the King’s Carpenter, the royal arms in the middle are of Charles I, with Scudamore’s arms on the left, and Laud’s on the right. The text across reads: Vive deo gratus / toti mundo tumulatus / crimine mundatus / semper transire paratus. The guidebook translates this as: ‘live in a way pleasing to God / entirely oblivious to the world / free from reproach / always ready to pass to the next world’. This kind of inscription is typical of John Abell – a similar quote is to be found on the market hall that he built at Leominster (now Grange Court). The gap in the upper railings to the left was caused by a reading desk which was located at that point when the pulpit stood to the left of the screen as well.

Font: made at the time of the 1632-33 restoration from parts of the nave (Cistercian Abbeys did not have fonts). This plain cover is not original – see next photo for the original, much more ornate cover, that is in keeping with Laudian ideas of the beautification of holiness. 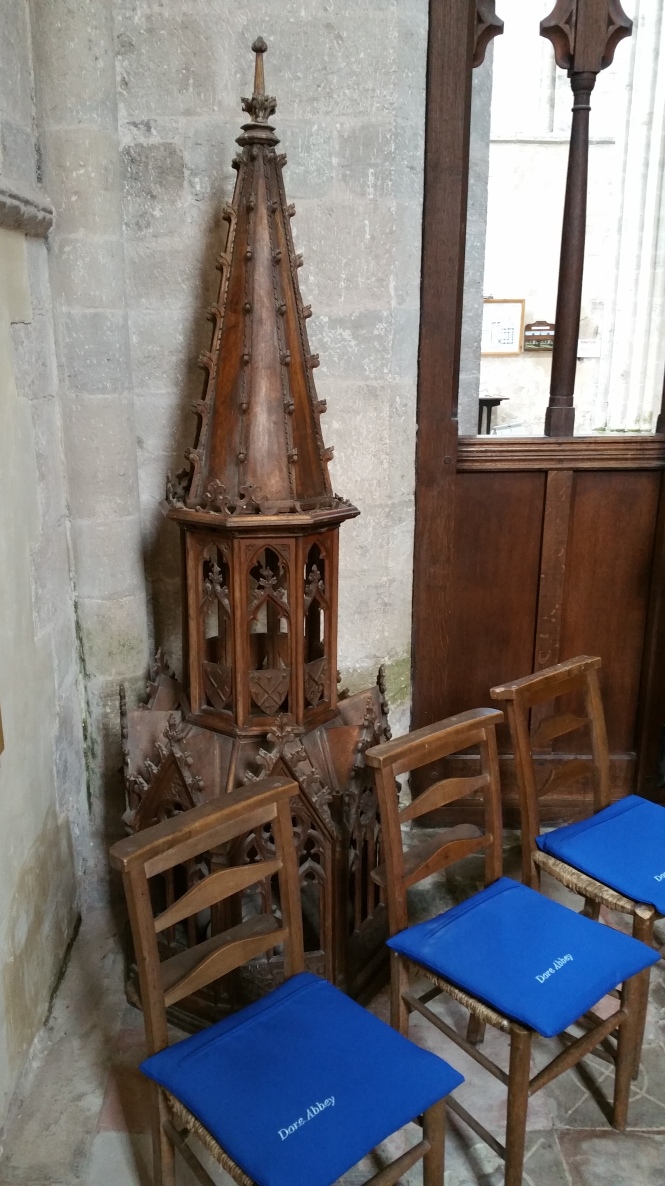 This is the original cover for the font.

The top of the poor box. It is inscribed: ‘H(e) that from ye poo(r) h(is) eyes will turn aw(ay) t(he)e Lord wil turn his …V..N yn later day yfro’. The guidebook suggests that it is probably ‘the lord will turn his eyes away from him in ye later day’.

The view down the North Ambulatory. The church is now often used for music recitals and the like, hence the large number of chairs! 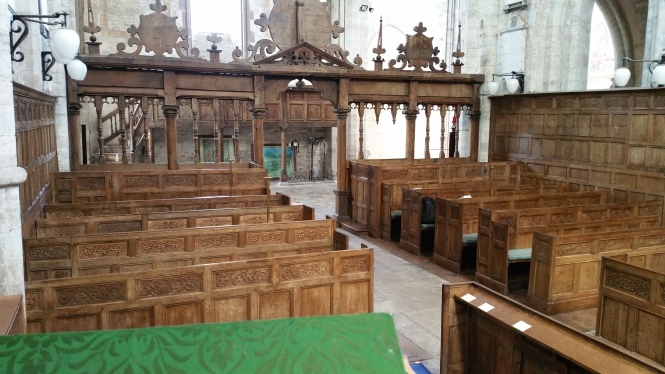 The Presbytery, seen from the pulpit. Note that although these are seventeenth century pews, they were moved into the presbytery at the time of the 1901 restoration.

The altar and communion rails. This is part of what makes the church such a Laudian Centrepiece. This church is unusual in having the medieval stone altar, rediscovered at the time of the 1632-33 restoration in a nearby farm being used for making cheese, in place. It is supported by some of the pillars from the nave.

The Pulpit, which dates from 1632-33. It was originally located outside the oak screen, to the left of the entrance (by the gap in the upper screen).

This shows the full height of the Presbytery, and you get a good sense of what the church must once have looked like under the Cistercians.

the chapels to the rear of the Presbytery now holds the findings from the 1895-6 archaeological dig. As you can see, there are a lot! 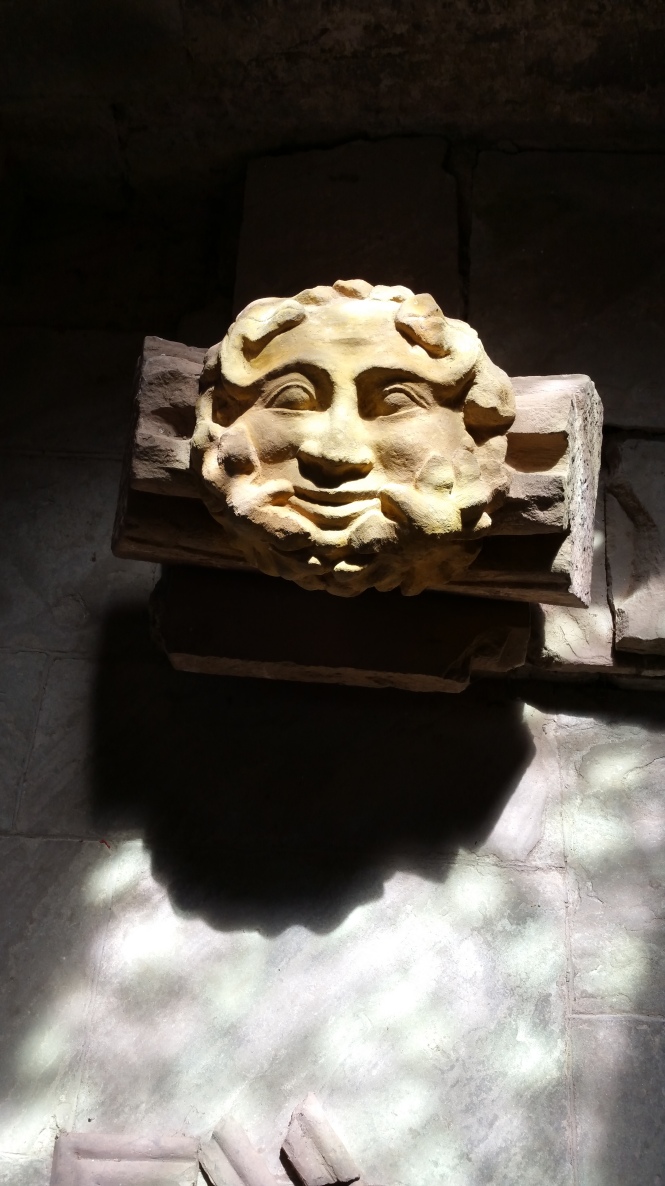 This is just one, rather spectacular roof boss of many found during the 1895-6 dig. Some bosses were taken down and hidden at the time of the 1537 sale; at least one was brought out and reused in the 1632-33 restoration, such as the Christ in Majesty boss that became a focal point for the laudian church. 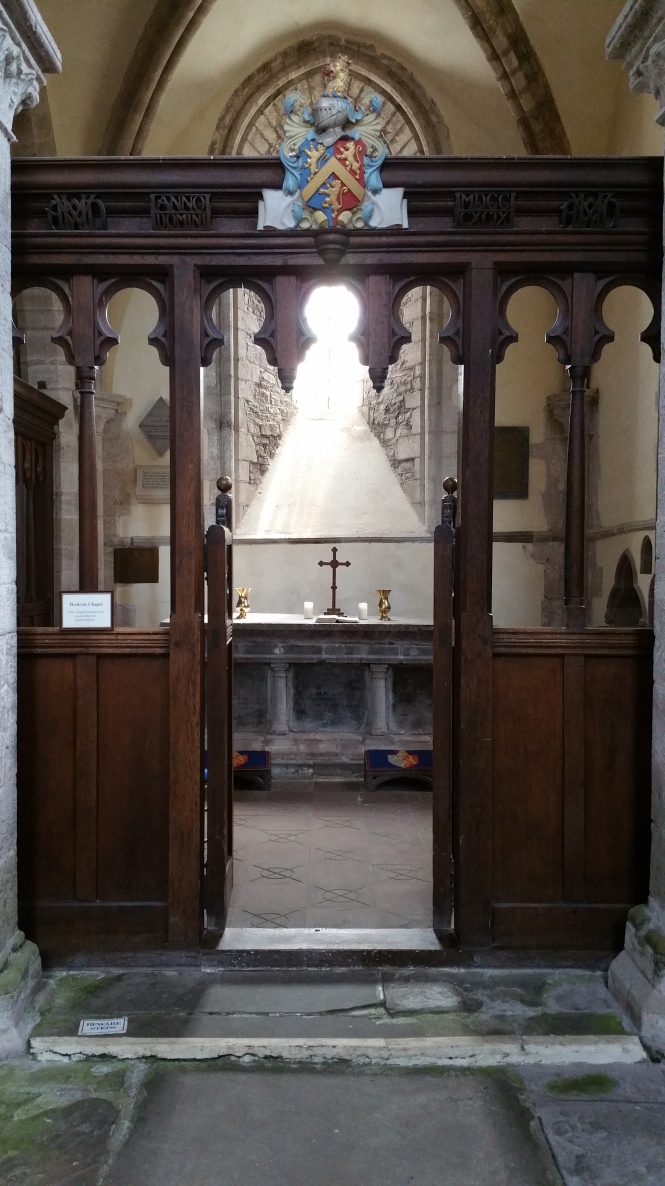 This the Hoskyns side chapel, an area still reserved for quiet prayer. The altar is actually the tomb of John Hoskyns, MP for Hereford, who was buried here in 1638. According to the guidebook, this is one of the only original monastic chapels still being used in this way. The oak screens date from the 1901 restoration. 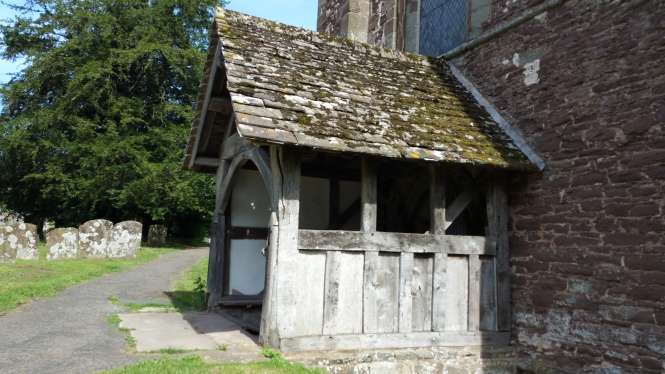 The east side of the church. Here, you can see quite clearly that the nave has gone, but also that either the floor level has changed since the abbey was first built, or it was built slightly into a hillside. from the entrance point, the visitor has to descend down 5-6 steps to enter the church.

Ruins outside. These are all that remain of the first arches of the nave after the crossing (what was the Monk’s Quire)

All that is left of the Sacristy, behind the North Transept. 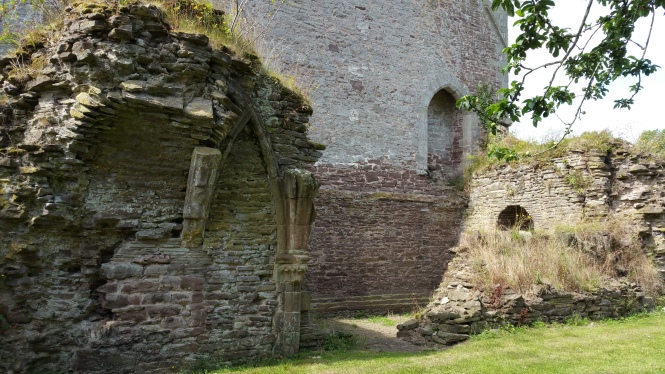 Taken from inside what would have been the Chapter House. Those who have visited the chapter houses at places like Southwell or York can appreciate what might once have been here. 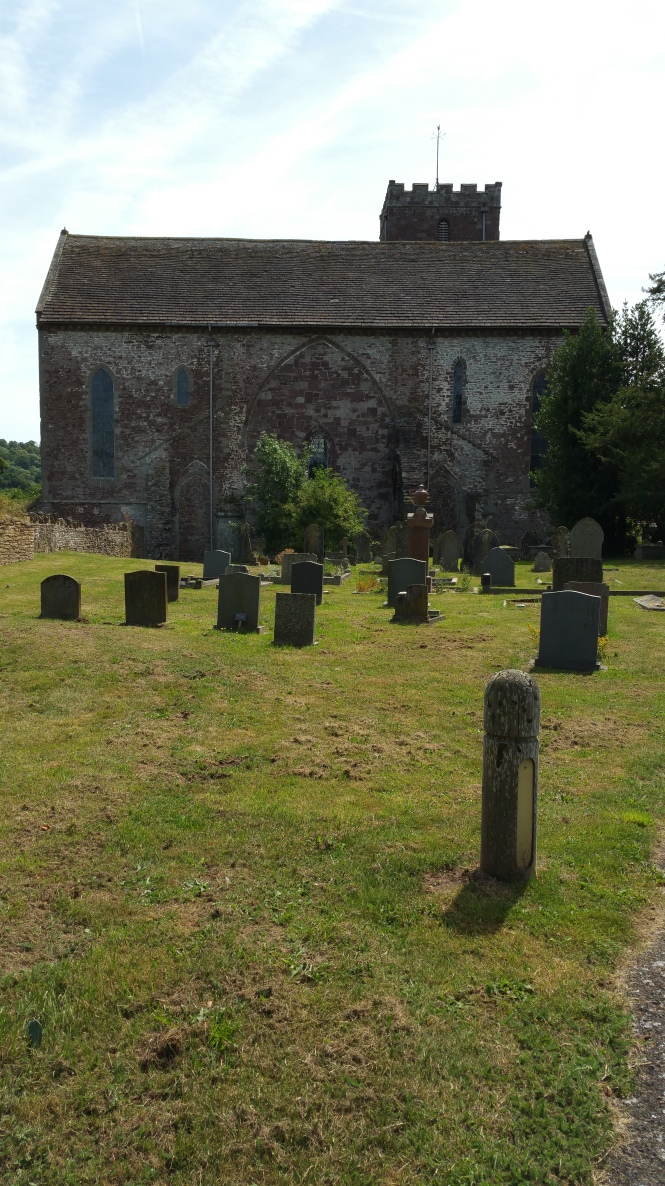